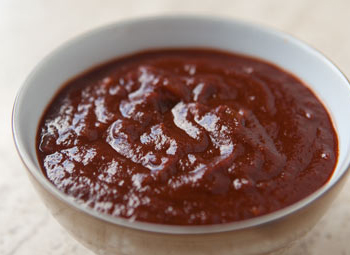 I know that barbecue season is drawing to a close here in California. I know there are places in the US where people’s grills are under two feet of snow, Nonetheless, here at Hot Eddie’s we grill rain or shine, night or day, cold or heat. Kinda like the Post Office “…Neither snow nor rain nor dead of night will stay these grillers from their appointed coals”. Of course, in the Southern Hemisphere, the ‘season’ is ramping up to full swing, so this sauce comes at a timely moment. In the spirit of never-ending summer, here is a killer Southwestern Barbecue sauce. It is great with smoked brisket, on ribs, on hamburgers, steaks, chicken, turkey sandwiches, or just splash it in your baked bean recipe. It is tangy with a touch of sweetness and a bit of a kick. No pictures because it is too darn easy.

We had a barbecue sauce taste-off recently and this was the winner.

2 dried ancho or pasilla peppers, seeded, and torn into pieces

1 chipotle pepper in adobo plus one teaspoon of the sauce

Combine onion, poblano, jalepeños, dried chiles, chipotle, coffee, and beer in a heavy 4 quart saucepan. Be sure to remove the stems and seeds from the dried chiles. Place over medium-high heat and bring to the simmer. Lower heat, cover and simmer for 10 minutes till the onions are translucent.

Remove from heat and add the liquid smoke. Puree with an immersion blender or in batches in a stand blender till smooth.

That’s it. Makes about 6-7 cups of sauce. Freeze some for later. Keeps in the fridge for about two weeks or more.

All original content and photographs ©2014 by Ed Colman and Hot Eddie's unless otherwise noted. All rights reserved. Unauthorized use or duplication of any material without express and written permission is strictly prohibited. Excerpts and links may be shared provided full and clear credit is given to Ed Colman and Hot Eddie's.
Loading Comments...
%d bloggers like this: